Even though NV-HAP causes more deaths than any other HAI, most hospitals don’t prevent, track, report it.

Recently, a group of healthcare leaders published a national call to prevent non-ventilator-associated, hospital-acquired pneumonia (NV-HAP). According to the National Organization for NV-HAP Prevention, or NOHAP, most hospitals do not track, report, or have initiatives to actively prevent NV-HAP, even though it causes more deaths than any other healthcare-associated infection (HAI).

Perhaps we've been needing a new way to look at HAIs, and this is it. Targeting NV-HAP could lead to progress in lowering HAIs overall, saving money, saving lives, and improving outcomes for countless patients.

Pneumonia is classified as hospital-acquired (HAP) if symptoms appear at least 48 hours after admission. Of all HAP, about 38% are ventilator-associated pneumonia; the remainder is NV-HAP. Other studies have found the HAP/NV-HAP split to be 25%/75%. It is surprising, then, that most hospitals historically have paid less attention to NV-HAP than to ventilator-associated HAP and have lacked both recordkeeping and prevention protocols for NV-HAP.

In this article, we'll discuss who has been paying attention to NV-HAP lately and list some methods that have been successful at reducing NV-HAP.

The Veterans Administration has focused on NV-HAP with its National VA HAPPEN (Hospital-Acquired Pneumonia Prevention by Engaging Nurses) initiative. The implementation team has been able to improve oral care for non-ventilated patients and has spread the initiative to 70 VA hospitals. Initial pilots in eight VA hospitals resulted in a 51% reduction of NV-HAP in long-term care units and 62% in medical and surgical units, saving many lives and millions of health care dollars.

Let's take a look at some methods involved in reducing NV-HAP.

When a ventilator is not involved, hospital staff may be less vigilant about watching for pneumonia symptoms, but prevention requires both vigilance and quick action. Respiratory distress, pain when swallowing, and difficulty swallowing (dysphagia) are symptoms that warrant immediate nursing interventions. Early diagnosis of NV-HAP is the goal, using blood oxygen saturation, sputum cultures, and chest-x-rays.

As always with healthcare-associated infections, basic adherence to infection prevention standards is a must. Staff education should include routine therapeutic interventions such as elevating the head of the bed to prevent aspiration (in which food, saliva, and liquids are breathed into the lungs), providing oral hygiene care by cleaning teeth, encouraging coughing, ambulation three times a day, and instructing patients in the use of an incentive spirometer.

The routine practice of these fundamental skills is not monitored at many hospitals, even though it has been shown to reduce the risk of acquiring pneumonia. According to Preventing hospital-acquired pneumonia, nurses should take the lead in changing that:

"Staff education about these protocols may increase buy-in at the unit level. Nursing’s focus should be on educating staff and ongoing research for these preventive strategies while also working with patients, families, and an interprofessional team of healthcare providers, and to emphasize the interventions’ importance."

Patients in acute care settings typically have depressed immune responses, so nurses and hospital staff should follow normal infection prevention measures (as they do to reduce the risk of HAIs of all sorts). These include hand-washing, providing bedside antiseptic hand scrubs, and encouraging the use of face masks to reduce the transmission of airborne pathogens. 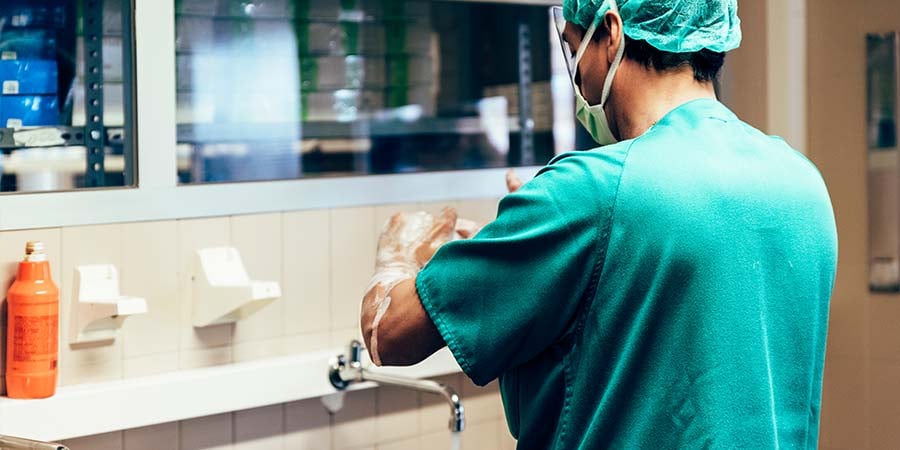 Also, vaccination of healthcare workers against influenza is critical in helping to prevent NV-HAP.

Since the medical community is coming to recognize NV-HAP as one of the most common and deadly HAIs, focusing on NV-HAP prevention could be the best route to making a dent in the number of HAIs.

Unfortunately, the realities of hospital staffing (workers stretched thin, underpaid) too often lead to imperfect implementation of disinfection and mask-wearing protocols. A good way to add a layer of risk reduction, then, is to clean up the air patients breathe by eliminating the majority of airborne viruses, spores, and bacteria that tend to congregate in healthcare settings.

You can do this by deploying equipment that uses HEPA air filters and far-UVC disinfection. HEPA filtration alone will collect most biological pathogens, including fungi, bacteria, and encapsulated viruses. HEPACART’s GermBuster 300 room air purifier pulls in air through a poly pre-filter to collect larger particles, then through a HEPA filter which removes particles at the hardest-to-trap size of 0.3 microns. It continuously reduces pathogen load in a room, changing the air in an 800 cubic foot space 24 times an hour. 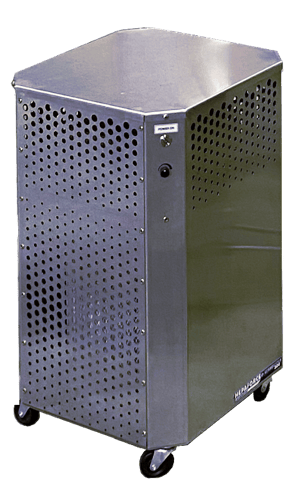 HEPA filters are awesome, and their cleaning is improved with the addition of ultraviolet germicidal irradiation (UGI), which is very effective in zapping pathogens to render them harmless. HEPACART's GermBuster Far-UVC Room Air Purifier and SmartClean Far-UVC Surface Disinfection Unit both feature far-UVC technology, which has been proven to be the most effective and safest UV wavelength.

Learn more about investing in air purification equipment that can reduce HAIs and NV-HAP at your healthcare facility.