It’s important to understand HEPA filters if you want to keep the air in your facility safe.

The U.S. HEPA standard requires that a filter retain 99.97% of particles 0.3 μm (micrometers, or microns) in diameter (the European standard is 99.95%), while particles both smaller and larger are filtered out at even higher efficiency. To give you an idea of how tiny 0.3 micrometers are, anything smaller than about 50 μm is invisible to the naked eye.

Ideally, every HEPA filter would be undamaged when installed and allow no air to bypass its seals, operating perfectly until needing replacement, which is done faithfully every 6 to 12 months (or as appropriate given usage, prefilters, etc.).

With such a straightforward and clear explanation of HEPA filters, why do we hear about HEPA filter types (even though there is only one), and why is it necessary to look for HEPA equipment certifications to ensure they're the real deal?

You can get a clue about the differences in "HEPA" products from the language used to advertise air filters and air purifiers. Marketers, not all of whom are as honest as Abe Lincoln, sell a LOT of substandard equipment using terms like:

Consequently, it became necessary for the good guys to invent marketing-speak for HEPA filters that actually meet the HEPA standard, which is true HEPA or medical-grade HEPA. So, if you encounter either of these terms or any of the misleading terms in the list of four above them, we're confident you know how not to be fooled.

Why HEPA Filter Testing is Important

All filters sold under the HEPA descriptor must be tested. Independent labs test the filtration capabilities of each filter using standards as set forth by organizations like the Institute of Environmental Sciences and Technologies (IEST) and Underwriters Laboratories (UL). These tests involve passing regulated chemical aerosols through the filter to ensure that the proper amount, at least 99.97% of all particles that measure .03 microns, are captured. The data from this type of testing is then printed on a label that is affixed to the filter itself.

Why In Situ HEPA Filter Testing is Important

Even with a properly tested HEPA filter, you need reassurance that the filter will perform properly in situ (as installed) — and that means testing it in place. The main issue is that the machinery surrounding the filter must be properly designed and manufactured to prevent leakage past the filter. Since filters can get damaged in transit, testing in place also ensures no pinhole leaks in the filter itself.

Here’s another way of explaining the importance of in-situ testing from the National Air Filtration Association: A HEPA filter is only as good as its gasketing and framing when installed, and because all HEPA filters are used in critical applications, in-place HEPA filter testing should be mandatory. This testing ensures that 100% of the air entering the unit passes through the filter by revealing any leaks in seals, ductwork, or filter.

Origin of the HEPA Filter

An urgent need for effective filtration arose from the use of poison gas in warfare. During World War II, the British found that a paper filter element from a captured German gas mask was remarkably efficient at capturing chemical smoke, and the British Army Chemical Corps replicated it for use in their own gas masks. Before long, they developed an air purifier with a blower and a deeply pleated cellulose-asbestos paper filter. This so-called "absolute" filter laid the groundwork for the HEPA filter.

The U.S. Army Chemical Corps and the National Defense Research Committee built on the British research to develop the HEPA filter, identifying as their target the 0.3 μm size, which they called the "most penetrating" size, to remove radioactive particles from the air during the Manhattan Project.

There are several ways HEPA filters catch stuff. Particles so small you'd think they'd slip right through a HEPA filter (that is to say, smaller than 0.3 μm) actually get trapped at a higher rate of efficiency than larger ones through diffusion. Once a particle is small enough — below ~0.1 μm — it follows the rules of Brownian motion and is moved randomly by ridiculously small forces such as atomic bombardment and collisions with water molecules (about which Albert Einstein wrote a paper in 1905). This zig-zag motion makes it much more likely that the tiny particle will get stuck in the fibrous maze of the HEPA filter.

Larger particles may be heavy enough to hit a fiber due to inertial impaction, simply crashing into it rather than following the airflow around it, or by interception, meaning they just come within one diameter of a fiber and get caught.

At HEPACART, we have a range of equipment that feature a medical-grade HEPA filter, meaning they have the highest efficiency rating, making them ideal for hospitals and outpatient facilities. Our HEPA filtered equipment includes the HEPACART® mobile dust containment car, STARC® RealWall, HEPAFORCE® AIR Negative Air Machines, and HEPAFORCE® GermBuster Room Air Purifiers.

Learn how the effectiveness of a HEPA filter paired with the power to intake contaminated air and output clean air makes our HEPAFORCE equipment air purification powerhouses. 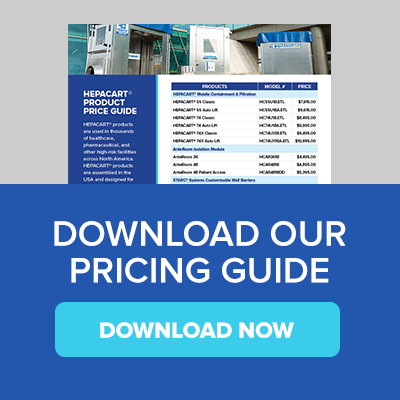